The total number of registrations executed during the fourth quarter amounted to 220 275, and there were nearly 404 000 renewed names. According to the report published by .PL registry, operating within the framework of NASK, at the end 2017 2 576 063 active domain names were being maintained for more than one million of .pl domain name registrants.

From January to December 2017 883 258 were registered in the .pl domain. At the end of 2017 2 576 063 active domain names were being maintained for more than one million of .pl domain name registrants. It’s also worth noting that the number of .pl domain names, secured with a DNSSEC service, amounted to 40 679. From the beginning of October to the end of December 2017 daily average 27 names, secured with DNSSEC, were being entered in the registry, while an approximate result last time was recorded in January 2014

- - In December 2017, within the framework of the Open Day of the .pl registry, we invited to NASK all entities declaring the interest in joining the NASK Registrar Programme. This event has already entered in the calendar if meetings, organized by the .pl registry, for current and potential registrars – emphasizes Wojciech Kamieniecki Ph.D., the director of NASK.

Next Open Day at NASK will be organized in spring 2018.

Among the events of the last quarter of 2017 worthy of note is also the fact that NASK was awarded a certificate of information security management system which includes, among others, a selected process in the Domain Department, consistent with the requirements of ISO/IEC 27001:2013 standard. In chapter "Insight into the .pl registry", you will find an interview with NASK PIB’s Quality Assurance Officer, Paweł Goławski, who describes the quality issues regarding the implementation of ISO 9001 standard on the registration and maintenance of domain names. 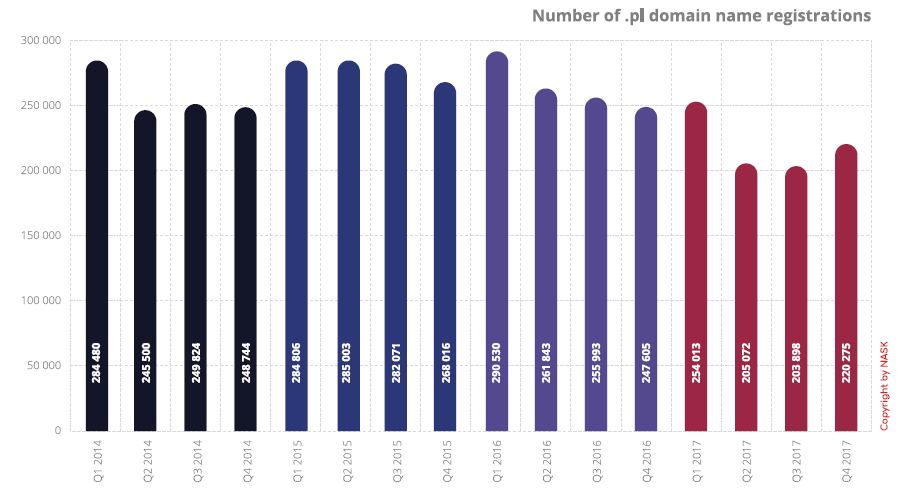 The report is available here: https://www.dns.pl/english/NASK_Q4_2017_REPORT_EN.pdf